Guest Review: Susan Scarlata's It Might Turn Out We Are Real

It Might Turn Out We Are Real by Susan Scarlata
Horse Less Press, 2011
Reviewed by L.S. Bassen 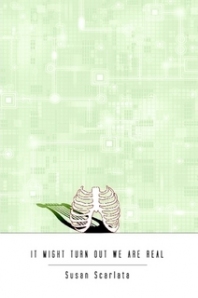 A quotation attributed to William Butler Yeats can be found in cyberspace, "What can be explained is not poetry." At least 63 people have ‘liked’ this quotation, but not me. I appreciate explanation. Susan’s Scarlata’s new collection is bookended by both an introductory “Proem” and end “Notes”. The “Proem” explains that her 64 poems are: “A recoup of the Sapphic Stanza form … They are strung… linked without attempt to present any sum total.” The first poem, “What Is Your Business Here?” begins, “I dreamed I carried a snake/ to a burnt cracked tree/…Our needs and wants…” include “a plectrum” and we are advised to “throw these bits/ in two directions at once.” “Plectrum” is explained in the end Notes, “A plectrum is a spear point used for striking the lyre…).”

Those “two directions” introduce twosomes appearing early that become landmarks. The phrase that reappears most, echoing Homer’s “wine-dark sea,” is “the red behind my ribs.” “Phantasmagoria” takes us further to when “it was all/Arcadia that whole day long,” and where “satyrs…/ …are…dancing” the “Hoof crunk.” Explained in the end Notes, “Crunk is a type of frenetic, urban, contemporary music and dance that fuses elements of hip-hop and electronica.”
In the familiar modern quest to polarize the definitions of artifice/art, rejecting civilization in order to rediscover a more authentic reality in the archaic past, Susan Scarlata is studiously un-lyrical and rejects at the same time she invokes earlier forms of lyric, narrative, and epic poetry. It Might Turn Out We Are Real is a marvel of expression of modernist tension between Classical/ Romantic inspiration and Ironic self-consciousness.

Midway in the collection, there is delight at “What Part Reached?”:
Listen, words were once carved on wax tablets
then placed in jars for safekeeping.
And what’s strange about
the hippocampus is how it’s both
a sea creature of whimsy, part fish and part horse;
and the ridged part of our brains where our
shortest of memories spend time.

By “Of Pelts And Cuff-Links”, you can feel yourself hoof-crunking along. In “To What Do I Most Compare You?” (post-modern echo of not “to a summer’s day”), the poet juggles rapture & reason: “… the knife was blunt/ the ram caught in thicket, or a deep appears…/ that will suffice. Synecdochic day. Part for the whole, and ‘civilized’ starts.”

Synecdochic Day ought to be an international holiday.

This collection also works as a precis course in the history of poetry & post-modern criticism. The syllabi for three recent classes are at http://www.susanscarlata. com/teachings/. Anyone creative in the post-modern period – certainly in the Academy – has been ironically constrained by a century of critical rules of rebellion and rejection of past formalities. The hostile antithesis of art and artifice has not yet found synthesis. With Ferlinghetti, we await a rebirth of wonder. It happens in some moments in It Might Turn Out We Are Real, the title a Romantic wish expressed in Ironic terms. In “A Living,” the poet writes, “The honey the bees made from almond flowers was/too bitter to eat.” Now there’s a perfect metaphor for the modern poet’s predicament.

L.S Bassen's The End of Shakespeare & Co. was the winner of the 2009 Atlantic Pacific Press Drama Prize.  Ms. Bassen also won a Mary Roberts Rinehart Fellowship and has been published in several print and online publications, including Kenyon Review and American Scholar.  She is a produced and published playwright and commissioned co-author of a WWII memoir.

Posted by janelle elyse kihlstrom at 2:09 PM No comments:

Check out Melusine 3.1, our Spring/Summer 2011 issue, right here.
Posted by janelle elyse kihlstrom at 2:18 AM 3 comments: