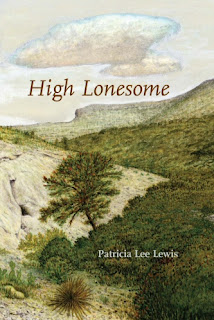 Spinning worlds out of language, writers require us to attend, to read, to listen.   The best writers are also those who listen, whether it be to the speech of others or to the messages they hear in the language of leaves or rocks or ocean.   Patricia Lee Lewis enters that rank of skilled listeners with High Lonesome, her second book of poems.  In this book, Patricia forefronts the art of listening as a dynamic act of connection.

“Jazz,”an emotionally intense poem, enacts a scenario where a 21-year-old musician-daughter asks her mother to “listen to that” jazz.  But, more importantly, to listen to her say, “I am pregnant and I am not ready.”   The mother is non-judgmental and concerned.   Desperate, the daughter asks her mother’s help. “And you knew that I would,” the poet writes.   They leave the jazz club and walk home, “parts of one song, one knowing/ remembering, one telling, one listening.”   The narrative of this poem is interlaced with imagery from modern art (“Blues like Picasso’s blue figures”) and jazz (“high notes on clarinet, shrieks of the horn”) which help weave the strong emotions into a wider aesthetic tapestry.

In “The Reader,” the poet again becomes audience, this time for a six year old girl.   Attentive, she “listen(s) for the clues, how she’ll write the story/ of her life.”  The poet knows that “it’s up to [the girl] to choose/ which words to love and which to fear.”   In one of my favorite poems, “This Day of Being Born,” the poet writes of a woman who “speaks to herself” as she cooks some potatoes.   The poem evolves into a meditation on a beloved son who “went out” one day but “did not return.”   In her first book, Patricia Lewis also wrote about her son who committed suicide.  In this poem, she admits that she may have lost him, “but things/ he loved carried him to her as if he had asked them to.”   The poem then breaks into a lyrical passage about the very potatoes she is preparing:

Lovely, smooth, full of life, he is in you, she sings.
From the ground we dig and hold, we wash and boil,
we put you in a blue glazed bowl the color of his eyes,
we thank you and we thank the ones who brought you here.

The simple, homely task of preparing a meal becomes a sacramental act.   Once the potatoes are cooked, she puts butter on them, “lets [it] melt across smooth skins, watches pepper/ float in light/ pours salt into her palm and sprinkles/ as her father sprinkled holy water on her newborn’s head.” Reading Patricia Lee Lewis we learn to appreciate the simplest daily tasks.  She makes such duties magical.

“Kayak” takes on more adventurous material with the poet becoming separated from a loved one in her kayak.  In this poem she doesn’t listen because she can not hear.   She rues this: “if your voice had carried from the pier/ as through the one remaing seagull’s wings,/ perhaps you would have kept your place beside/ me in the sudden storm.”  Becoming separated from the voice she wants to hear, she grows desperate:  “drowning/ is the only sound, the cutting off of air/around your face, the silencing of movement/ toward me now.” Clearly, she has more adventure than she wants to deal with: “the kayak learns the river,/ and the heart the rushing cataract.”

Patricia Lee Lewis structures this poem beautifully, employing the device of a series of “Ifs” which function to build the necessary suspense.   The narrative elements are kept to a minimum, allowing the emotional material to take the primary position.   She’s not a story-teller; she’s a priestess of the heart’s passions.  In “Standing By Song,” she employs her voice to engage some standing stones, possibly in Wales where she locates another poem.  The woman in her poem comes to a “kneeling place between/ two great stones,”   Once there:

. . .  she sends her voice,
low at first, the way she thinks a stone
might sing.   It reaches something original,
strong.   She feels it more.   The stones
begin to rumble in response.   She sings louder,
at the lowest frequency she has.   How else
to speak to them?  Something pushes
from within the standing stones; pushes
through her spine to make her stand,
make her start again.

What’s remarkable about this passage is its depiction of the power of the woman’s voice, so powerful that the stones listen.   Their listening and responding reinvigorates the woman.   She takes some of their strength into her own being: something “pushes/ through her spine.”  She no longer kneels; she stands.

With this newly acquired strength, she offers herself to others in “Leopard Frog.”   Once again, she structures the poem around possibility with a series of “What ifs”:  “What if you should find me/ on a windy day, my body curled/ around a red oak trunk, my head/ at rest on granite, my hands in prayer.”  She encourages the “you” to notice what she looks like, to feel her cheek, to reach her hand inside her pocket and not to be afraid: “do not pull back, but pull within yourself/ and listen.”   Listening to Patricia Lee Lewis has its benefits:

Perhaps you’ll hear the echo
of my voice, leopard frog, acorn,
panting of the bear, and you will rise
and walk to where the world
is waiting.  You will say, I found
a woman in the woods.
I left her there.

The engagement the poet offers is magical, just as this book is magical in its essence.   Become a good listener, she advocates, and the world will open to you.  As it has opened to her in these artful, compelling poems.

Claire Keyes is the author of The Question of Rapture, a collection of poems. Professor Emerita at Salem State College, where she taught English for thirty years, she has also written The Aesthetics of Power: The Poetry of Adrienne Rich, published in paperback in 2009 by the University of Georgia Press.  Her poems and reviews have appeared in Calyx, The Valparaiso Review, and The Women’s Review of Books, among others.
Posted by janelle elyse kihlstrom at 2:22 PM No comments:

You probably guessed right, much appreciated readers, if you guessed that our Fall/Winter issue, Volume 3.2, is now available, just in time for your holiday reading pleasure.

If you haven't already, you can check it out right here.

And have a happy one!
Posted by janelle elyse kihlstrom at 11:39 PM 1 comment:

Our "Fall"/Winter issue will be appearing while it is still technically fall (astronomically if not meteorologically) but it will be a little delayed from when I was originally hoping for it to appear, by the first week of this month.

Aside from the server migration issue with the hosting service setting me back a full day's work or so, a shocking loss this week has made it difficult to focus on the work I had planned to do, and frankly, I've gotten pretty much nothing done in the last five days.

But as long as this annoying cold I'm fighting doesn't turn out to be the flu, with a little work this weekend and over the next week, hopefully the issue will launch by the end of next weekend, December the 11th.  It's going to be a pretty good issue, content-wise, I think, so I'm looking forward to being able to finally get it out there.
Posted by janelle elyse kihlstrom at 6:01 PM 4 comments: