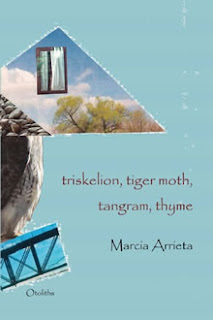 triskelion, tiger month, tangram, thyme, Marcia Arrieta's first full-length poetry collection, opens with an epigraph from Jacques Lacan, "the unconscious is structured like a language."  Arrieta's poems seem to be structured in the way a language of the unconscious might be.  Like dreams, they merely hint at underlying realities, making no attempt to corner them outright.  Her lines are brief and her sentences are briefer, many composed of just one word.  One of the longest in the collection is found in the poem "learning to see," stating simply that "we must continue to believe in the magical."

Arrieta's poems have a spiritual component, not in a dogmatically religious sense but rather following in an Eastern tradition which found echoes in the West with Blake, Rilke and later the Zen-influenced Beat poets, now somewhat out of fashion in this increasingly materialistic new century.  Impervious to current trends, Arrieta's approach suggests she still views the poet's task as that of the mystic, to observe, if not for the purpose of intellectual comprehension, then at least of a cerebral processing of awareness and an experiential sort of understanding.

Her poems make no conclusions or value judgments, no pat statements, only observations, notes from the field.  They compile abstract objects into a montage of hints and clues that read much like half-remembered dreams.

At times the mystery of this terse, abstract style may confound the reader to the extent that it feels arbitrary and deliberately hermetic, in the way of a challengingly simplistic modern art piece or inscrutable Zen koan.  Not every line rewards and enlightens with repeated readings, but many do.  As Arrieta counsels in "Impossible," "binocular a feather./ pay attention."

In addition to Eastern philosophers, Western psychoanalysts (Lacan, Jung) and artists such as photographer Joseph Sudek and sculptor/architect Isamu Noguchi, Arrieta draws inspiration from modern physics, in particular Einstein's theory of relativity.  There are also several recurring motifs from nature, one being the "bear at the window," perhaps representing the wild, the unknowable, the dangerous.

In "the mysteries," Arrieta writes:

We read there an allusion to Lacan's theory of the symbolic but also to the enlightened master, to Einstein the formidable genius, and even to the bear at the window, each represented by the distant mountain.

There is also a call to engagement with this world in all its mystery, both to observe it and to dive right in.  In the collection's first poem, "Almost Real," Arrieta writes, "read the sand.  swim in./ travel the sequence of numbers./ study the wave theory of light."

"in search of fireflies" ends with a sort of metaphysical math problem:

a gingko leaf is found
in a book of psychology.
equate the sunflower.

The section titles of this collection are often poems in themselves.  One is a simple semi-colon.  The final one is titled, "A Circle," and is followed by a brief poem:

The theme of unity emerges as, not ironically, the unifying force in this bold collection which feels equally comfortable with its experimental veneer and the timeless project at its heart.
Posted by janelle elyse kihlstrom at 4:34 PM No comments:

Apologies for another lengthy hiatus between reviews.  A new one will be coming by next weekend.

Meanwhile, I need to make a reluctant but necessary announcement about the flash fiction contest, which was scheduled to close by the 15th of this month.  To be perfectly straightforward, we just haven't received enough entries to award the prize of this self-funding contest.  I know a lot of you are like me and sometimes wait until the last minute on these things, but in the case of the poetry contests we held over the last two years, we had a good stack of entries by this point, and based on that comparison, we just can't be assured we're going to end up with enough to hold a fair, competitive contest this year.

So we're going to have to pull the plug on this one.  All entrants' reading fees will be returned by PayPal within the next few business days, and again, my apologies.

But for those who like contests, don't worry; we haven't abandoned them entirely.  We still plan to hold one next year, one you all just might be interested in, so check out our next two issues to learn what we've got in mind.  Our Spring/Summer issue is almost filled and will be launching in June, and as always, we're accepting art, poetry and flash fiction submissions on a rolling basis year-round.
Posted by janelle elyse kihlstrom at 6:42 PM No comments: