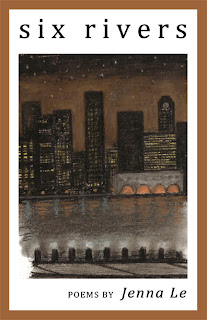 In Jenna Le's accomplished debut collection Six Rivers, the poet draws inspiration from the bodies of water she has known – from memory, from her mother's reminiscences, and from the collective imagination.

Exhibiting a rare natural ease with demanding forms ranging from the familiar sonnet and villanelle to the lesser known French triolet and Japanese haibun, Le imbues even her free verse poems with a certain formal sensibility. Nothing in her style is haphazard, yet the poems' narrative candor and lyric intensity keeps them fresh and vibrant and occasionally searing in their brutal honesty and self-deprecating humor.

The narrative trajectory of the collection can be read as a sort of bildungsroman told from the perspective of a second-generation American who achieved the proverbial dream her parents aspired to, for themselves and for her, at a young enough age to feel the limits of its promise. In "Ada Lovelace," we hear the tale of a young woman gifted in the pure science of mathematics who could not entirely elude the vestiges of poetry lurking in her genome, the legacy of an absent father once larger than life and subsequently repressed by a pact between mother and daughter that took the form of linear equations and geometric proofs.

The poem ends with lines addressed by a friend of her father's to young Ada on meeting her at a party: " 'Young lady,' he mused,/ "your mouth is exactly like Lord Byron's.' "

The collection begins beside the Perfume River of Vietnam, the narrator's ancestral home, where in the opening poem we learn that her mother once lived in a "brick house overrun by chickens."

The first river of the narrator's own childhood is the Upper Mississippi which flows through her native city of Minneapolis. In "Trick," she employs a simple but potent analogy to tell the familiar American story of an immigrant couple's attempt at assimilation, with its attendant longing and persistent alienation that is subtly transmitted to their American-born child: "America, you're/ the Halloween costume/ my immigrant father/ rented and never returned." The poem continues, "Dressed up in you,/ my father seduced/ my starry-eyed mother/ behind a tall hedge.// But now the costumier/ is demanding you back./ He calls our house daily,/ ringing the phone off its hook."

The next section, set on Boston's Charles River, begins with the poem "Remonstrance" that sets the tone for the sensual poems that follow with "Here in Massachusetts, brine scents the sky/ in a way that masks the small individual/ odor of your sex."

The section set on the Hudson River continues in this sensual mode. These lines from "Three Short Poems on a Common Theme" are pitch-perfect in the subtlety of their eroticism:

I couldn't sleep a wink all night: my brain agitated its solitude
like a washing machine/

filled with copies
of your immaculate white shirt."

Knockout lines are the exception here, though, as the collection isn't riddled with extractable gems that outshine their context. The punch in these largely narrative poems is in their skillful construction and their delicate unfolding. The surprises they yield are subtle but satisfying.

In the section entitled "The Aorta," Le draws on her medical background for inspiration, and in a poem about Claribel Cone, one of the first American women to attend medical school, she quotes Henri Matisse, of whom Ms. Cone was a patron: "Matisse described his art/ in this way once: 'It starts/ as flirtation, but it ends// as rape; it ravishes me."

Looking beneath the provocative phrasing, this quote seems to apply as well to the literary artist. Is Le thinking of the revision process, in which the roles of poem and poet, subject and object, are often reversed, and the poet in the end serves the poem?

In “Ada Lovelace,” the narrator speaks of her math tutor: “He seized up geometric concepts as though they were cold-blooded eels,/ sliced off their heads, and proceeded/ to dissect them with sexless fervor.”

The collection's final section, entitled "The River Styx," includes a "Hymn to Aphrodite," which closes with:

Teach me to stop trying to mix
shyness and love,
two substances that are as averse to mixing as
oil and tears.

In these bold yet delicately crafted poems, Le's unique voice and formal technical prowess present the substantial promise of an emerging poet with much to offer.